The typical driver emits 4.7 metric tons of carbon monoxide every year. This is an improvement on previous years, showing that we are driving more efficiently, however there is still a lot of progress to be made. Here are just a few ways that we can all clean up our driving.

Much of our carbon footprint relies on how hard-footed we are when in the car. Applying less pressure to the gas pedal and accelerating more smoothly churns through less fuel and results in less emissions. This smoothness also applies to braking when possible – harsh braking may lead us to then have to accelerate back up to speed. Then of course there’s our gear shifts, which can help to reduce revs.

Most modern cars now have helpful features such as gear shift indicators that can help you shift gear at the right time. There may be other economy settings that can further bring down your miles per gallon. If your car doesn’t have these features, fuel saver gadgets such as Go Far could be worth purchasing.

There are also other gadgets that may be able to improve your driving economy. The Eco-pedal, for example, is a gas pedal that applies pressure back against your foot to stop you accelerating as hard.

Keeping tyres well-inflated, being economical with electricity and reducing weight where possible (taking a roof box off when empty) can all further improve fuel economy.

Even if you’re stationary and not touching that gas pedal, the engine itself will be producing emissions just by being on. Turning off the ignition when idle for more than ten seconds can help to prevent these emissions (turning off your engine when idle for less than ten seconds isn’t worth it, as turning the ignition back on will use just as much fuel).
Some countries are already bringing in laws to stop idling for long periods when parked up, enforcing a three minute maximum idle time. Many cars will even have anti-idle features that automatically turn the ignition off. 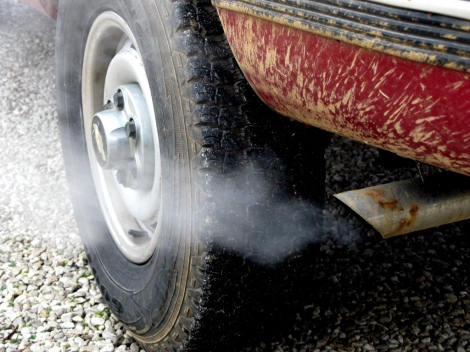 The colour of your exhaust fumes is worth keeping an eye on – any odd colours could be an indication that your car is not burning up fuel properly, resulting in more toxic emissions.

Black smoke in both petrol and diesel vehicles is generally a sign that there’s incomplete combustion going on possibly due to a blocked air filter or oil leak. More raw carbon is therefore being pumped out into the air.

Blue smoke meanwhile could be a sign that too much oil is being burnt. This could be because the oil level is too high or that piston rings or valves are worn. Again, this will be producing unhealthy carbon emissions into the air.

White smoke meanwhile is generally a sign that your vehicle isn’t burning enough fuel, or that coolant is being burnt up. This could be due to anything from a blown head gasket to a damaged cylinder head. Thick white smoke can also not be good for the air as whilst less fuel may getting burnt up, chemicals from excessive coolant may be getting released.

By getting all these bad exhaust fumes attended to efficiently you may be able to reduce the damage they do to the atmosphere.

Your choice of vehicle can obviously have an effect on the amount of emissions that you create. A greener vehicle will not only save the environment, but save you money. You’ll stop for fuel less often, but you’ll also pay less road tax if the vehicle consumes less fuel.

Modern fuel vehicles are constantly becoming more fuel efficient. There are meanwhile plenty of electric vehicle companies such as Bintelli Electric Vehicles offering everything from cars to bikes.

Electric vehicles come with all other kinds of financial perks if you live in a city. Many cities around the world have introduced free parking areas for electric cars as well as use of specialist vehicle lanes such as HGV lanes or Bus lanes. There are also some cities with free charging stations for electric vehicles in a bid to get people to convert.

On top of electricity, there are other fuel alternatives that have been explored such as hydrogen fuel cell cars and biofuel cars. Whilst fuel for these cars is not so readily available, you could also save huge costs by opting for such a vehicle, whilst also contributing to less fossil fuel usage.

Of course, you can also produce less emissions by driving less often. If you drive to work and know a colleague that lives local who also drives to work, why not commute together? Similarly on days out with friends, rather than each going in your own vehicles, why not share a ride? You’ll save money and it will be more social.

Walk/cycle where you can

Some of us may also be able to cut out the emissions produced by short journeys by opting to walk or cycle instead. Taking a bike or walking has all kinds of other benefits over driving. It will save you a lot of money, as you won’t be using fuel or be having to pay for parking. It will keep you fit, unlike driving in which you’re stuck in the same sedentary position. It may also help with dodging a morning traffic jam (in a bike you can weave past the traffic), and if you’ve got a trip to the pub planned you don’t have to worry about limiting your drinks.

One response to “How To Clean Up Your Driving”