Some statistics are worth to be communicated especially when they present the real image of a story. Today we (people, governments and corporate) have in our hands, a tool that help us understand the real sources and responsible of the main greenhouse gas (GHG) emissions since 1971. Undeniably we are all need to participate to the change and embrace a lifestyle with neutral carbon footprint, but in parallel we need to make THEM change. Every year billions of tons of gas are burned, a process called flaring, because their exploitations are not profitable, it is a waste of natural gas but also a very polluting process performed in every oilfield on earth.

For the first time in the history of our Planet, we are able to identify the main responsible for the two third (or 63%) of GHG emissions caused by human activities; this amount represents 914 gigatonnes of CO2. Humanity pays by its health, by the reduction of soil’s productivity, climate disasters and so many other problems because of the lust for profit and power without any thought about consequences. While since 1972 during the UN Conference on the Human Environment nation-states agreed on the principle that each nation has the sovereign right to exploit their own resources without damaging the environment of other nation-states. The information comes from a recent study published in the  journal Climatic Change “Tracing anthropogenic carbon dioxide and methane emissions to fossil fuel and cement producers, 1854–2010” which presents “a quantitative analysis of the historic fossil fuel and cement production records of the 50 leading investors-owned, 31 state-owned, and 9 nation-state producers of oil, natural gas, coal, and cement from as early as 1854 to 2010”. 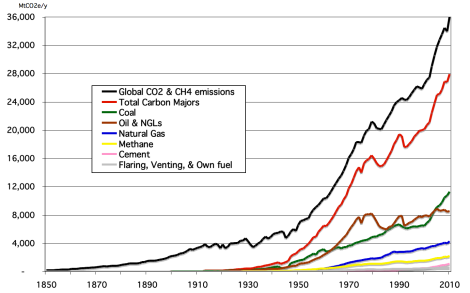 The results are quite astonishing since the 914 billion tonnes of CO2 equivalent (GtGCO2e) that was traced to 90 international entities or named carbon majors represent 63% of the global industrial CO2 and methane from fossil fuel combustion, flaring, venting, fugitive or vented methane, own fuel use, and cement between 1971 and 2010. There are no doubts that the study reveals many interesting information, never reported before with such precision and transparency: 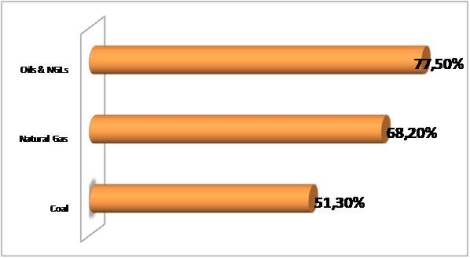 There are no material differences whether the carbon majors are state-owned, nation-states or investor-owned, they all contribute nearly by the same proportion (34,4%, 34,1% and 31,5% respectively).

The 20 largest investor-owned and state-owned energy companies have cause about 30% of the global industrial emissions from 1971 to 2010. But there is another issue that the study very correctly underlines; for once we are able to look at the GHG emissions responsibility and have a better image of the precise major responsible.  Until now the debate has always been pushing nation-states to take measures to solve the problem and today we are able to say, which corporate are responsible for the emissions between 1971 and 2010 and in addition which nation-states are truly involved. The results include other nation-states never pointed before like Saudi Arabia, Venezuela, Mexico, Iran, Kuwait, Abu Dhabi, Libya, Nigeria, Indonesia, Brazil.

The change must come from everyone, this is fact but we know now that a large part of the anthropogenic climate change is mainly the result of the activity of some international entities to which governments and international laws motivate to burn more fossil fuel resources instead of pushing them to change our energy model.

Furthermore if these entities continue to burn fossil resources at the same rhythm, the anthropogenic climate change will be even more important, having dramatic consequences for public health and climate stabilization. It is urgent to consider the replacement of the actual energy system and resources in order to avoid further environmental disasters but how? There is an interesting part in the analysis provided by R. Heede which is for me a key point:

“Indeed, the entities identified in this analysis hold two important assets—production capacity and proven recoverable reserves—that, together with profit motives and tax and regulatory incentives to discover and produce new fossil fuel reserves, hold the key to future fossil fuel production and emissions (Allen et al. 2009b), and thus, arguably, the future of the planetary climate system.”

The carbon majors to which refers the study, are responsible for the 2/3 of the historic carbon dioxide emissions and furthermore are the most powerful entities; they have the money and fossil energy resources. In other words they have the future of our planet’s climate in their hands.

“The International Energy Agency has concluded that “no more than one-third of proven reserves of fossil fuels can be consumed prior to 2050 if the world is to achieve the 2 °C goal” (IEA 2012b); most of these reserves are in the hands of carbon majors. Redoubling international efforts to secure an effective climate agreement will likely prove insufficient unless some means can be found to involve the carbon majors in the effort to keep their reserves in the ground or commensurate efforts to prevent or offset their emission to the atmosphere.”

In conclusion, nation-states will have to change their strategy to ensure the replacement of our energy system and instead of giving incentives to these carbon majors to increase fossil fuel combustion but the opposite, incent them to keep these remaining resources in the ground and invest in more carbon zero energy resources. And we, citizens of the world, free human beings we need to continue our efforts to change our energy habits, force the carbon majors to propose us alternative, push them to get more involved in our own scope. The more we are the quicker things will change.

Green Tip: Reduce your car/bike use, don’t waste energy for nothing and prefer green energy solutions whenever you can. Download MissBlue Energy Guide for easy and free tips.