MS Tûranor PlanetSolar has been upgraded and ready to sail. The boat is back again on water and a really interesting program for 2013 is waiting the new crew starting from Monaco Marine Shipyard – La Ciotat (France). The improvements performed the past few months allow the diversification of the applications of the vessel.

Launch of the boat in La Ciotat, 28th of February, 2013 – Credit: planetsolar.org

After two years of navigation with solar energy give the PlanetSolar teams the ability to define and proceed to the adequate upgrade of the vessel. The maintenance took six months of dry-docking and now PlanetSolar is back in the water. What is the result? The upgraded PlanetSolar presents renovated cabins, a new sundeck on the bridge, reinforced mooring cleats, an increased capacity of water tank and an improved rudder. Finally, the major improvement was made to the propulsion system, where the teams replaced the propellers by a completely immerged system and installed more powerful electric motors on the bow thrusters. In other words, all these improvements give the ability to the vessel for the first time to navigate to the northernmost part of the Atlantic (near the Arctic). The new crew presented during the launch of the 2013 Campaign in Monaco on March, 18th has a wonderful, fascinating program upcoming:

Launch of the boat in La Ciotat, 28th of February, 2013 – Credit: planetsolar.org

The year 2013 is a challenging year for our favorite solar ship; MS Tûranor PlanetSolar will intend to show the practical applications of the largest solar boat ever built. “It will move beyond its role as mobile ambassador of solar energy and become a multifunctional tool, just like a Swiss Army Knife”.

See more detailed information on the plane and the team on: http://www.planetsolar.org 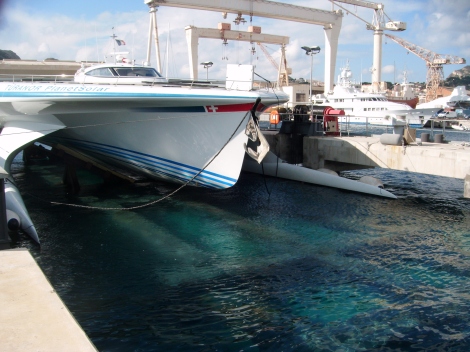