The goal was to show shipping industry, engineers and scientists all around the world that solar power can be exploited far more than we are doing now. Imagine a vessel fully sailing day and night powered by the sun power. Its name is “Türanor PlanetSolar”, 31 meters long and 15 meters width, the ship owns its existence to the Swiss, Raphaël Domjan, former ambulance driver and mountain guide, who had a vision in spring 2004: create the first solar energy catamaran and make the first world tour, until today never succeed.

Türanor PlanetSolar catamaran was the vision of Raphaël Domjan, the design of LOMOcean Design (Craig Loomes) and built by Knierim Yachtbau in Kiel, Germany. The project was launched on 31 March 2010. The ship is made of carbon fibers and 537 m2 of solar panels with a capacity of 93.5 kW. The solar panels are backed by 6 blocks of lithium-ion battery. Thus, enough electricity can be stored to run the catamaran for up to three days without direct sunlight. The ship began its world trip on September 27th, 2010, crossed the Atlantic Ocean, the Panama Canal, the Pacific Ocean, the Indian Ocean, the Suez Canal, the Mediterranean and completed his trip by arriving at Hercule Harbor in Monaco on May 4th, 2012. After 584 days, all around the world, the ship and its crew are preparing video documentaries and photo galleries to show the whole adventure. Türanor PlanetSolar has reached two records: fastest crossing of the Atlantic Ocean by solar boat and longest distance ever covered by a solar electric vehicle, making it a major event in the history of shipping. 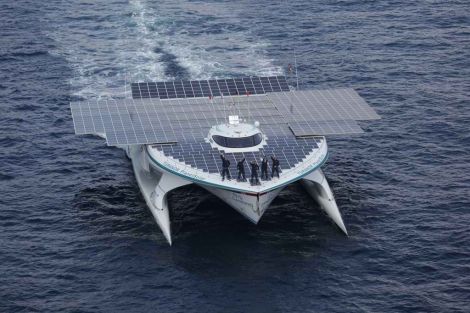 At the arrival, in Monaco, ceremonies, which included a light show were powered by the energy stored in the craft’s batteries, video can be viewed on the boat’s website (see below). The vessel is now scheduled for a refit in order to be chartered to tourists in the Mediterranean Sea. The boat creation cost around 12.5 million Euros, 14 months of construction, a team on board and out board of nearly 100 international scientists, engineers and boat builders and was baptized “Türanor PlanetSolar” which means “power of the sun” in J.R.R Tolkien mythology. What is the impact of such action? Inspire the industry, show it is possible, but it would be today difficult to convinced shipping companies to change right away, the prototype solar boat sails with only just enough power to keep the catamaran at around 7 knots (about 8 mph) during favorable conditions, which remains slow by sailing standards. It is just the beginning, since we are entering a new area where we can see already rethinking about hull and engine designs for fuel efficiency improvement, some operators are starting to make their ships travel more slowly in order to reduce fuel consumption.

See more detailed information on the ship and the team on: http://www.planetsolar.org/

Article “Around the World on Solar Power” By BETTINA WASSENER, http://green.blogs.nytimes.com/2012/05/03/around-the-world-on-solar-power/

2 responses to “Türanor PlanetSolar, the first solar ship to circumnavigate the world”